With a new supercomputer, the UNC achieves the highest computing power available to the scientific community and the productive sector in Argentina.

With a new supercomputer, the UNC achieves the highest computing power available to the scientific community and the productive sector in Argentina.

The new supercomputer was delivered to the UNC Campus yesterday afternoon. It has a peak capacity of 156 trillion operations with decimal numbers per second. It will be used for projects in astronomy, chemistry, biotechnology, social sciences, statistics, physics and engineering, among other fields. It will also strengthen the research on COVID-19 that has been carried out in the simulations performed by the UNC clusters. It was acquired with funding from the Large Equipment Acquisition Program (PAGE, by its Spanish acronym) of the UNC Office of Science and Technology, with an investment of 371 thousand dollars. [10.02.2021]

With the arrival of "Serafin" -the name given to the new supercomputer-, the National University of Cordoba has positioned itself as the scientific-educational institution with the greatest computing power for research in the country.

Serafin´s installation will begin in a couple of weeks, when the reconditioning tasks at the UNC Data Center are completed. After a series of tests, it is expected to be operational by mid-March.

Oscar Reula, director of the CCAD, explains that, although the largest supercomputer in Argentina belongs to the National Meteorological Service, it is dedicated to a specific purpose: simulations related to weather forecasting. With Serafin, however, the CCAD will become the center with the greatest computing power in the country for the scientific-technological community and companies.

He also emphasizes that the CCAD has an open policy regarding its facilities and scientists from all the provinces, and even from neighboring countries, are allowed to use the computing capacity installed at the UNC. "Today, you can't do science in almost any field if you don't use supercomputers, they are a fundamental tool. In order for our science and technology not to lag behind, we have decided that they should be used as much as possible," he says.

As for the interaction with the productive sector, Reula points out that the CCAD is open to collaborate with companies. He recognizes that for many companies it is simpler to rent this type of services in the cloud, but explains that strategically, it is preferable for the country to promote the use of local capabilities.

In this regard, he mentions the agreement reached with the Argentine Aircraft Factory "Brig. San Martín" (FAdeA) to simulate parts of the new projects in the field of aviation. 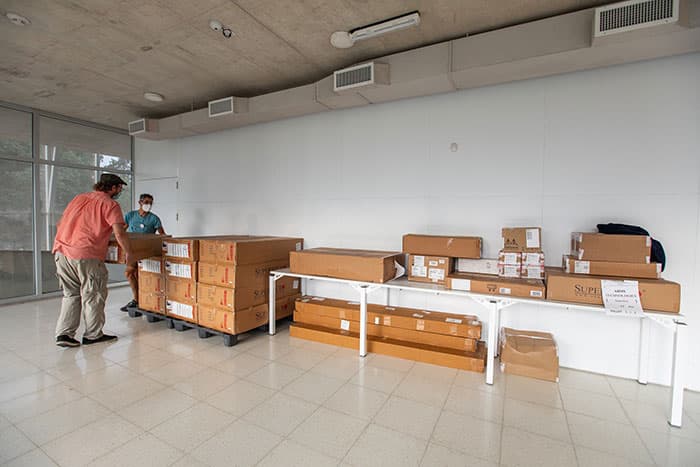 From nanotechnology to gravitational waves

The range of projects that will take advantage of Serafin's capabilities is endless, as is the variety of disciplinary fields that benefit from the use of these technologies.

Marcelo Mariscal is the director of the project for the acquisition of the supercomputer, submitted to the 2018 PAGE call for proposals. According to him, teachers and researchers from the Faculties of Chemical Sciences; Exact Sciences; Economic Sciences; Mathematics, Physics, Astronomy and Computing; and the Astronomical Observatory, as well as from several institutes that dependent on both UNC and CONICET (National Scientific and Technical Research Council), participated in the elaboration of the proposal.

Among the research projects that will use this new computational capacity, Mariscal highlights the studies related to COVID-19.

"Many of these studies use simulation techniques known as molecular docking, or techniques where drugs already approved for other therapies are tested and analyzed to evaluate their action against the SARS-CoV-2 virus," he explains.

And he adds: "There are projects that are very active and need this computational capacity because they launch billions of calculations to find a particular drug that has specific activity against this virus." Serafin will also enable, among others, simulations in materials physics, the development of nanotechnology for alternative energies, the study of gravitational waves, and the development of biosensors, compounds of pharmacological interest and antimicrobial systems to treat infectious pathologies.

It can also be applied to machine learning, big data applied to social networks, the study of large-scale dynamics of the universe and the evolution of galaxies, as well as the estimation of panel data models in economics and the construction of composite indicators to evaluate economic and financial performance.

Regarding the interaction with the socio-productive sector, Mariscal emphasizes that the PAGE application was endorsed by several companies, which expressed their interest in using these services.