Ms Marcela Lagarde y de los Ríos, the renowned Mexican academic professor, assured that even though Higher Education centers have received great influence from a femenist perspective, there is still great resistance towards its adoption and to consider the view of gender with a “universally interpretative, scientific and philosophical” scope.. She pointed out this concept within the framework of the Micaela Law at UNC implementation on October 7, 2020 [10.08.2020]

Ms Marcela Lagarde y de los Ríos is renowned globally as an academic professor, an anthropologist, as a Mexican researcher specialized in Ethnology ( Autonomous University of Mexico), and as a representative of Latinamerican feminism.

She was recently invited by the National University of Cordoba to open the series of virtual conferences organized by the Gender Policies Central Unit ( UNICEPG), which were carried out throughout October, within the framework of the Micaela Law implementation at UNC (https://www.unc.edu.ar/g%C3%A9nero/ley-micaela-en-la-unc). The event was broadcast on October 7, 2020 by the  UNC YouTube channel, and counted with the wide participation of nearly 600 people.

On this occasion, Lagarde y de los Ríos delivered the conference “The Urgent Gender Scope”. She not only referred to the urgent need to adopt the gender view to visualize and analyze the issues of any society facing the increasing world demand of receiving gender education, especially to the younger generations, but also, to the urge for universities to “change internally” with the objective of educating students with the gender scope, and , at the same time, to incorporate this view at an academic and institutional level.

The Mexican specialist’s conference was preceded by Mr Hugo Juri’s (UNC rector)  message through which he thanked Lagarde’s presence and highlighted his own participation regarding the gender education and training activities directed to the whole community that UNC has been carrying out. He also confirmed the institutional compromise in the construction of a university free of gender violence and towards a more egalitarian society. At her turn, Ms Analia Barrionuevo, UNICEPG ‘s coordinator, stressed the fact of the need for the continuation and the fostering of gender meeting and training points and for moving forward towards a cross-sectional scope at graduate and postgraduate studies’ syllabi.

The leading question that marked Lagarde’s talk was centered on what the feminist scope is and why its application is urgent. This question triggered the concept of deepening the gender sense and scope “as a mechanism that may enlighten the interpretation and the knowledge of social, economic and political issues anywhere in the world today”. In this sense, Ms Lagarde pointed out that feminism has built a set of criteria that, collectively, may be useful to visualize “what society is facing and cannot see, as we are incapable of recognizing what is evident”.
She remarked that ,“the gender perspective refers to the way of visualizing issues through a feminist scope. This includes the knowledge of the history of feminism,  of feminist political ideas, their causes, the achievements in human rights, and of democracy itself”. She added that the whole world demands, “ through civil rights, organizations and networks that the gender perspective be applied to politics, governing systems, and to academic, university and scientific activity”.

In another part of her talk, she referred to the challenge of the urgent need to incorporate the feminist scope into the university environment, and to overcome the patriarchal system which is still in force, “university institutions have a pätriarchal and supremacist structure, and that is an obstacle”, the feminist anthropologist explained. She described the resisted but continuous historical process of the incorporation of women ïnto universities so as to learn in that very space “pieces of knowledge that were also patriarchal '' which , in turn , were questioned thanks to the development of critical thinking that created the possibility “of producing criticism out of knowledge, ideologies, philosophy and patriarchal politics”. Such gender awareness had its roots in seminars, isolated courses , and minority university groups, which were, later on, gaining space, as Ms Lagarde went on to say. However , she warned that “it takes a significant period of time to convince, work and research with this perspective and to be able to share it in academic environments” 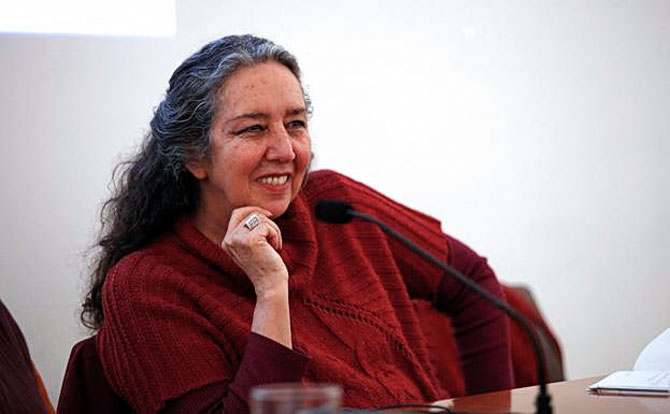 Along these lines, she remarked that ,nowadays , we are witnessing “a great process of acculturation, a cultural change, which is civilizing, but we have not reached the goal yet”. She added that even though “universities have been strongly moved, the gender perspective with an interpretative, scientific and philosophical scope is not being universally professed yet, there are antagonistic ideas , still highly patriarchal. These ideologies at universities are one of the many serious obstacles that hinder the progress of such perspective”.

Likewise, Ms Lagarde referred to the existence of “a clamour, a global demand to receive urgent gender education”, not now as an extra-university course and in a marginal way, but, cross-sectionally incorporated into the syllabi by allotting economic and trained human resources specialized in gender matters.
“Nowadays, all over the world, in pandemic times, there are thousands of gender meetings on different platforms. We are together, training and educating ourselves, and shaping this complex vision of the world and life. Therefore, there is an urge for the new generations to be educated within the gender scope”, Ms Lagarde pointed this out, and ”also highlighted the fact of the great job that universities still have to undertake “ so as to be able to “train students, women and men within the gender vision, and added that, alongside, universities must change internally to include such scope”.

On the other hand, Ms Lagarde y de los Rios also mentioned the great academic and scientific production delivered by femenist groups, synthesized in summits , treaties and world agreements , such as the one called by the UN in Mexico (1974) ”to incorporate, at an international level, through the relations with governments, a vision that we call today: the gender scope”, as well as the Convention on the Elimination of all forms of Discrimination against Women (CEDAW, General Assembly of the United Nations, 1979), which proposed a formidable point: to identify how much we have to change in society to achieve the ellimination of discrimination and violence”.

In particular , Ms Lagarde highlighted the role of the Interamerican Convention to Prevent, Punish and Eradicate Women Violence known as Convención Belém do Pará (1994), which defines women violence as a human rights and essential freedom violation.  “Belém Do Pará gathered feminist academic scholars, militants, activists, politicians and public officers from all over the continent, with the objective of clarifying, and of analyzing violence against women thoroughly, and, thus, avoiding shallowness in the analytical process. Going deeper into the explanation, Ms Lagarde pointed out how the patriarchal supremacism generates gender violence, this has been shown by demonstrating how the different ways of violence are linked to nodal issues related to the gender conditions of people, of both genders.” Along the same lines, she emphasized that deep knowledge on different expressions of violence and discrimination is a necessary condition for their definite elimination. “if we do not know how to disassemble different shapes of gender violence, we will not be able to eradicate them”.

The management of this international conference was in charge of the gender specialized journalist, “Pate'' Palero,  and counted with Argentine sign language interpretation to guarantee communicational access. This talk was directed to teachers, university administrative staff, university officers and to the general public. This event is part of a series of virtual talks that are taking place throughout October. A second meeting has been planned for Tuesday, October 27, on such occasion , the event will be in charge of Ms Diana Maffia, philosopher, academic scholar at Universidad de Buenos Aires (UBA) and UNC Honorary Doctorate.

These conferences take place within the Micaela Law framework- national law to which UNC adhered and this fact sets mandatory gender training- and includes different instances to be fulfilled. In addition to the talks, a course on gender education, delivered by UNC virtual campus, and a third instance that involves the organization of small group workshops will be taking place.

She has founded university institutions , collective groups and networks; she is a professor and a researcher in feminist epistemology,  and in women and girls’ human rights. From 2003 to 2006, she produced and conducted a diagnosis research work on Femicide Violence in the Mexican Republic, in 14 volumes. She is a professor in Mexican , LatinAmerican, Spanish and American universities
The Special Commission for Political Reform at CDMX granted her an award for her participation in the reform, basis for the constitution of the Autonomous Federal Entity, Capital of the United Mexican States, site of the powers of the Union, 2015. She was a congresswoman at the Mexico City Constituent Assembly and presided the Human Rights group. Together with 99 other congressmen and women, she wrote up the Political Constitution of the City of Mexico, 2015.

Her written work is vast. She has researched on diverse topics which are present in her books and numerous articles, such as, The Captivities of Women:  motherwives, nuns, prostitutes, prisoners, and insane. On such work (re-edited several times in Mexico and Spain), she was awarded the Mauss Prize for the best thesis at the UNAM Philosophy and Literature Faculty.