The first musical meeting within the framework of an especially arranged cycle in order to celebrate the twentieth anniversary of the Declaration of the Cordoba Jesuit Square as part of the World’s Heritage has taken place. Three short UNC Symphonic Orchestra ensembles interpreted chamber music on the balconies of Montserrat National School,the entrance of the Old Rectorate and from the atrium of the Compania de Jesus Church. On November 17, the Provincial Chamber Choir offered a performance, too. [13.11.2020]

This performance was called “Music on the Balconies of the Jesuit Square”, executed by three small UNC Symphonic Orchestra ensembles which interpreted chamber music from the balconies of the Montserrat National School, at the entrance of the Old Rectorate, at the atrium of the the Compania de Jesus Church. 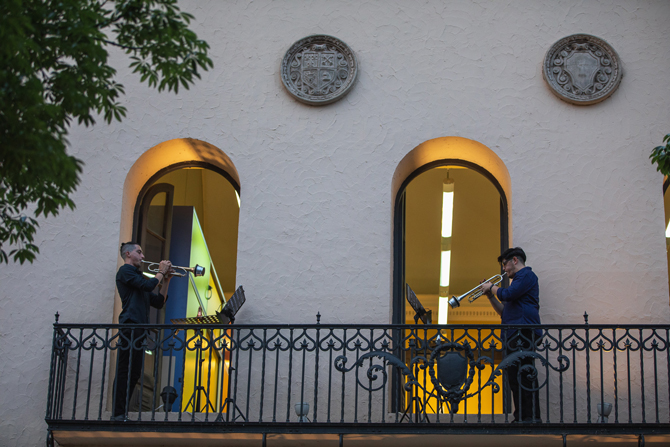 The cycle went on with the performance of the Cordoba Provincial Chamber Choir on November 17 at 7 pm. The concert was recorded at the Montserrat National School and it was broadcast by the UNC official Youtube channel. 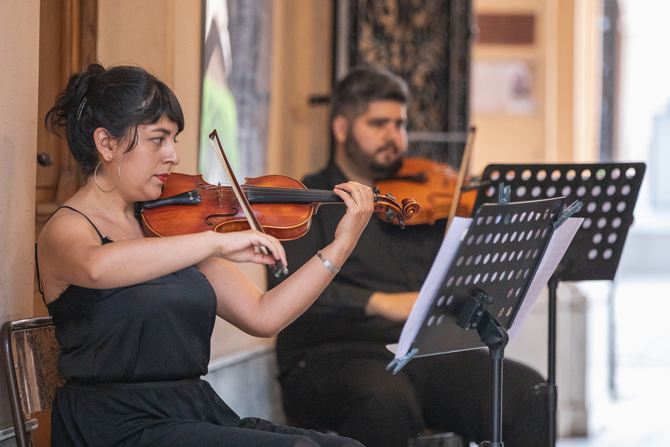 Likewise, another activity for this celebration within the program is the cycle of thematic conferences on the Cordoba Jesuit Square that will be carried out through scheduled exhibitions on five thematic areas. For such activity, renowned specialists on the different areas have been summoned. This activity will be open to the general public who will be invited to participate through the official UNC Youtube channel.

On November 29, 2000, UNESCO declared as World Heritage the architectural complex composed of the Jesuit Square ( consisting of Montserrat School , the Church and the Residence of the Compania de Jesus Church, in charge of UNC) and the Jesuit “estancias” sited in Jesus Maria and Alta Gracia ( both National Museums) , Colonia Caroya and La Candelaria ( in charge of the Cordoba Provincial Culture Agency ) and Santa Catalina( private estate).

On the occasion of the Twentieth Anniversary of the aforementioned Declaration, which, needless to say , was of utmost significance for Cordoba’s culture , art, architecture and history, UNC together with Cordoba Provincial Culture Agency and Cordoba’s city City Hall performed a commemoration central act on November 30, 2020, at 7 pm.
Such an act was carried out under the strict application of the sanitary protocols currently enforced at the UNC Graduates Hall , Central Patio and Cloisters (within the premises of the Cordoba Jesuit Square).

The central act will take place on November 30 at 7 pm with the participation of the organizing authorities at the UNC Graduates Hall, Central Patio and Cloisters ( Obispo Trejo 242) and it will also be broadcast by the UNC official Youtube channel.

The celebration will count with the performance of the Chamber Ensemble of the Cordoba Provincial Symphonic Band and allusive plates shall be unveiled.

Besides, a new application developed by the Cordoba Tourism Agency with the endorsement of the UNC, Montserrat National School and the Compania de Jesus Church will be introduced.This application proposes a virtual multimedia circuit around the whole area of Cordoba Jesuit Square. This virtual circuit includes videos , photographs, self-guides and information texts on each of the sites that compose the Jesuit Square.

Similarly, the unveiling of Illumination works, urban finishings and valuing works targeted to enhance the Jesuit Square and its surroundings took place. These works were carried out by Cordoba’s city City Hall and Cordoba’s Province Tourism Agency.

For further information , unload the activities schedule attached to this article.